At St Margaret's our children love science and we love providing as them with a variety of opportunities including investigating; using the outdoors environment; meeting real scientists and engineers; using scientific equipment; using their imagination and gaining knowledge. We are very proud to have been awarded the Round 10 Primary Science Quality Mark Gold level for 2016.

We have also been awarded Gold for the Space Education Quality Mark.  The feedback we received was extremely positive 'St Margaret’s amazing portfolio shows what wonderful work has been done across the entire curriculum throughout every age group with children using Space Science as a theme for their maths lessons, science lessons as well as inspiring their work in English, Art and PE.'

September 2019 - Year 4 were enthralled by solids, liquids and gases thanks to the inspirational Nick Barker of Warwick University. 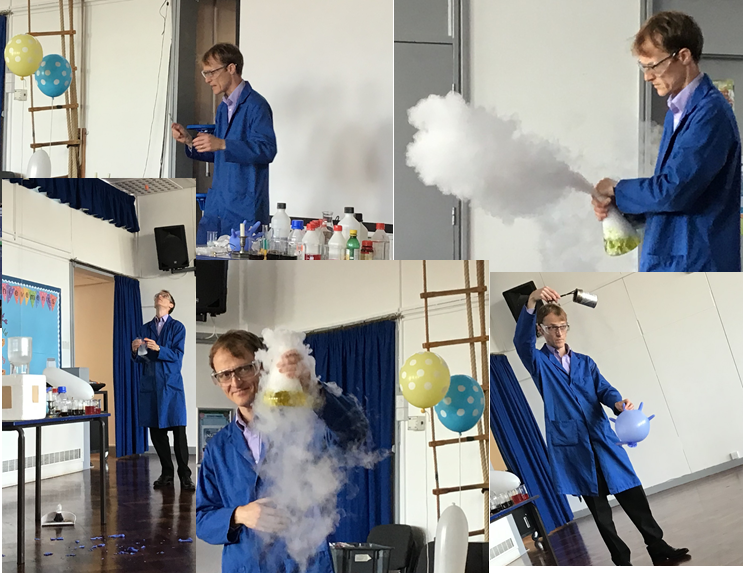 We are very proud of all the children who work so hard to produce a science project independently. The photo below shows the children whose projects were chosen to represent our schools at the University of Warwick Primary Science Fair. They had a fabulous day and were amazing ambassadors  for us all. As a federation, we won EYFS, took third place in KS1, and won Lower KS2 and Upper KS2 sections. What a fantastic outcome! 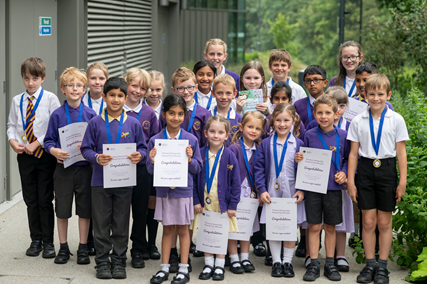 On Thursday 23rd May we held a fun and informative family learning night with scientist Josh Worch from the University of Birmingham. We learnt about how plastics are made now and how they could be made in the future and enjoyed making vegetable polymers (SLIME) ourselves. 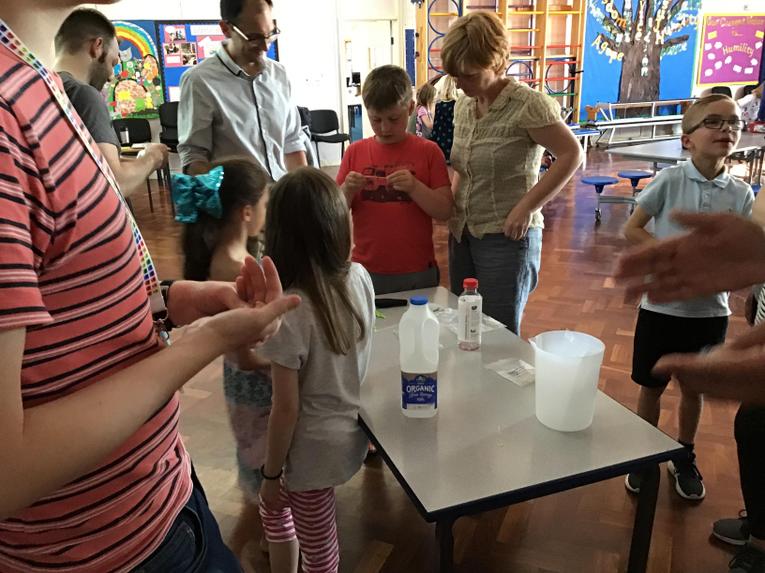 SM10 had a super trip to the copse today finding hundreds of baby frogs in the long grass by the pond; leaf shield bugs in the trees; an orange spider and what appeared to be a cacoon. This was their summer visit and they were able to make interesting pie charts for species to see which season they preferred.

Year 4 had a fantastic opportunity to watch the chemistry of solids, liquids and gases in action with award winning chemist Nick Barker from Warwick University. 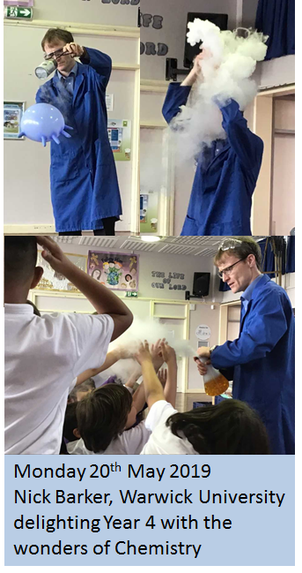 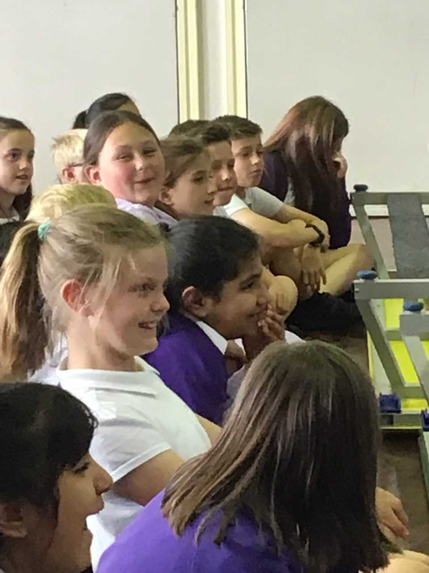 Just before SATs Year 6 were lucky enough to have an inspirational STEM talk with Vidura, an engineer and dancer.

Please print your ticket for our Family Learning Evening here...

15/3/19 - The pupils in Year 6 proudly shared their amazing science projects with their buddies. Over 220 parents came to enjoy our inspiring Science Fair.

Over the last few weeks, children from Year 3 and 4 have had lots of fun making various sorts of slime in Mad Science Club.

On Wednesday 24th October, some Year 6 children were lucky enough to attend a Science Challenge Day alongside several other local schools. They enjoyed learning about how to be a palaeontologist - including  tracking footprints and identifying bones and teeth. They then had to put these these skills into action when they were given their own 'fossilised dinosaur'. After carefully extracting the fossil, they determined whether it was a carnivore or herbivore and tried to deduce the type of creature it was and where it may have lived. They then presented their ideas for 'peer review' and questioning. The children were really enthusiastic, engaged and represented St Margaret's really admirably. Well done to all those involved.

Engineers from Ricardo helped Year 5 plan a super-exciting crash testing investigation. The children had to show their best collaboration skills and demonstrate that they could work scientifically. A brilliant opportunity to use advanced equipment and talk to real scientists! Some of our amazing science projects...

On Tuesday 27th February, the whole school were entranced by Tim Harrison as he delivered his award winning science show on 'Gases in the air' . There were fire balls, bangs, and gasps of delight from the children and staff!  Tim has won 'Chemistry Teacher of the Year', is an Associate Professor of Chemistry at the University of Bristol and a Fellow of the Royal Society of Chemistry. The children were challenged to make predictions, revised scientific vocabulary and really consolidated their understanding of solids, liquids and gases.

This Tuesday, we were really lucky to be visited by archaeologist and BBC TV and radio presenter, Julian Richards. Families from eight schools across the county were completely absorbed as they heard all about his life as an archaeologist; judging from the fantastic questions at the end it definitely inspired our young scientists and historians. He even stayed to chat and sign books 😊.

Year 4 were wowed by Prof Nick Barker (Warwick University) who showed them solids, liquids and gases in a really spectacular fashion!

Georgia from Mad Science astounded the children in a super exciting assembly! They learnt about flammables and gasped as the flash paper disappeared before their eyes! Smoke rings were produced from an air cannon and wind bags were used to demonstrate lung capacity. Everyone was amazed by the finale of icing sugar being ignited to create dragon breath!

Year 4 children are excited about their hedgehog visitors...

In their final Imagineering Club, the children showed impressive soldering expertise. They have successfully constructed a radio, moisture and fuse testers! 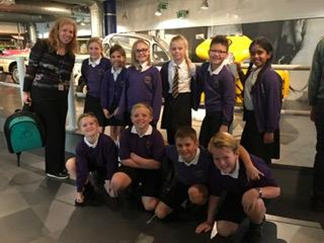 Children in Year 6 have been taking part in a national BBC Terrific Scientific investigation. A great start to their unit on Evolution and Inheritance: they were measuring each others foot flexibility and comparing it to the terrains they walked on. They were fascinated to compare their results with other schools around the country and rose to the challenge of  taking part in 'real' science!

Year 6 Imagineering group with their bridges.

Before they were tested for destruction.
Can you guess which group won?

Mr Panesar, Head of Campion School lead an exciting whole school assembly with the help of Mr Tiffany and Mrs Kent. We were all amazed at the brilliant 'whoosh' experiment!

Children from all classes have been enjoying a new science club; learning about light and using scientific equipment.

St Maragaret's has been selected by the Royal Institute as one of the few schools nationally to chose the Young People’s Books Prize 2016. We have formed a judging panel including a child from each class who loves science books. There are 6 books to read and  we are enjoying them all so far! I wonder which will come out on top...

On  the evening of 27/9/16, we gathered in the hall to learn about Exoplanets and discover whether there might be LIFE on another planet. Thomas Killestein (Warwick University) presented to over 50 Year 5 and 6 children and their families and introduced us to 'extremophiles' and the 'Earth similarity index'. We also had the chance to experience a Van der Graaff generator and ball launching thanks to Derrick Willer (IET).

Year 6 Imagineering Club have been working in teams to try and build the strongest bridge. All of the bridges have now been tested to destruction by adding weights ... can you guess which team won?

We have been investigating...

Year 6 visited the copse to identify trees using a key and also had an opportunity to discover what was in our pond with a pond dipping session. We are going to be investigating what changes happen in our environment over time.

On Tuesday 21st June there was a real ‘buzz’ at St Margaret’s third Family Learning Evening. Year 3 and 4 children and their families showed their practical science skills making burglar alarms and learning about electrical circuits. Mr Derrick Willer, from the IET, provided the talk and all the equipment and we were pleased to see children from St Joseph’s attending too.

On the 9/3/16 we held our second Family Learning evening. Over 80 people were there including families from our neighbouring school, St Joseph's Catholic Primary. We enjoyed a fascinating talk from Prof. Andrew Levan from Warwick University about SUPERVOVAE.

Year 4 pupils told us what they had learnt:

"When you put 1 proton and 1 neutron and 1 electron together you form Hydrogen. To make Helium, you need 2 protons, 2 neutrons and 2 electrons."

"We found out that approximately 701 billon supernovae have happened."

Year 3 have been dissecting flowers and learning about their parts

At the end of January, Year 4 pupils were lucky to have Marianne Costa and Nick Barker from Warwick University come and give a fantastic talk about solids, liquids and gases. This linked in brilliantly with their learning about states of matter. Arjun said that the 'Chemiluminescence' was one of the most amazing things he had ever seen in his life! Other highlights included observing the effects of liquid nitrogen and liquid oxygen. Did you know that oxygen can reignite a flame? Even Mrs Williams-Cook was impressed by the explosive burning of alcohol fumes which left just a few drops of water as a waste product. Could a St Margaret's pupil be inspired to be a scientist of the future? Watch this space!

Year 4 got a very close encounter with lots of vertebrates and invertebrates when 'Natural World Experience' came into school.

Arshnoor, a year 4 student who attended, wrote a super account of the evening, this is part of it:

'When I went to the crash testing dummies presentation it was very interesting. We saw a real crash test dummy. Charlie was its name. That was chosen because it worked for a boy or a girl! He or she represented a 6 year old for the crash tests...There was a small experiment with bin bags and eggs...When the volunteer dropped an egg on an empty bin bag, it broke...When an egg was dropped on a bin bag full of air it broke again...Lastly the bag was full of air but had holes so it could SQUISH and the egg was as good as new!

Air bags aren't about the bang but the squish.'

Some of our Year 6 children have been enjoying building bridges at Imagineering Club with an engineer Phil Hodgson and Mrs Ellis.

Year 5 have been using the microscopes

We are now a Tim Peake School!

Look at our Science boards!

We have been using Microscopes we have on loan

Year 4 have been outside this term firstly collecting leaves and making a key to identify them and then finding bugs as they learnt how to classify invertebrates.

Choose a link to visit.

I
Welcome to our website. Please go to the Testimonials, Year Group and Learning in Action pages for a window into our wonderful schools. We aspire that everyone at Briar Hill Infant School and St. Margaret's CE Junior School will 'Flourish as a family, love to learn, make memories, shine!'
Top
Cookie information
Cookie Notice